Node Scaffold Design Limited teamed up with Proplant Scaffolding Limited to provide access to a Building Maintenance Unit (BMU) that was located on the roof of a 37-floor tower in London.

Node, who are based in Walthamstow and are Associate Members of the Scaffolding Association, were approached by Imperial West via a longterm client with an initial brief to support a 25,000kg ballast weight of a BMU to enable partial dismantlement and replacement of hydraulic rams.

It soon became apparent that the design needed to incorporate a lifting beam with running rail above the rams to enable instillation. However, the space constraints on the roof meant that the usual method of works would not be suitable.

“The structure was required to be erected based off and tied to the existing BMU steel track frame to enable transfer of the high loadings to the supporting structure. The scaffold support platform was installed to support the ballast weight of the BMU and have a higher-level lifting frame arrangement positioned above the BMU to enable the hydraulic rams to be raised.”

The free-standing support structure also needed to be fitted with an upper-level NIKO rail frame as well as netting above the roof level parapet. The Node team also considered the contractors whilst designing the structure as Rory said:

“We liaised with Proplant’s site team for their input regarding the buildability and logistics to ensure the design suited the tight constraints on space and gear size.”

Through 3D modelling and rigorous full frame analysis to ensure stability, the design had a detailed review from main contractor engineers and was approved ready for Proplant to take over.

Brentwood based Proplant, who are Audited Members of the Association, had a well organised logistical operations plan, as Proplant’s Scaffold Site Manager for the project, Kevin Hayward, explained:

“Materials were unloaded into designated loading areas on the ground floor, approximately 250 meters away from the entrance. The materials were loaded onto designed trollies and transferred into the pre protected lifts and raised to within two floors of the roof area, then they were manually carried to site. With the amount of storage space available, this had to be undertaken on a required basis to allow other trades to carry out works and keep areas open.

The project may have been small in comparison to many of the large projects undertaken by Proplant but due to its location and complexity, many obstacles and challenges arose, especially with the building being live with residents and other trades. The scaffold was built within the designated time scale which was only possible due to the team work of all parties.” 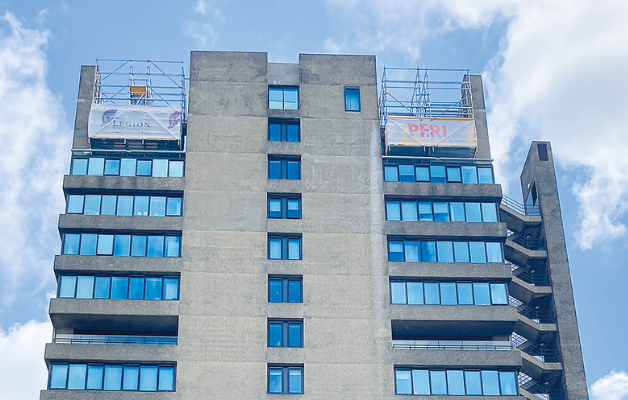 Green is no longer ‘just an option’